The Khajiit are cat-like people originating from Elsweyr. They are known for producing skooma and are considered "functionally extinct."

In the events of "Diabetes Anderson," S'oggy Balls committed genocide toward his own in Elsweyr by releasing a plague. After returning to Skyrim, he planted Skooma on Hroar in order to track down his father, Crotch Guzzler, by scent. Khajiit all over Skyrim appeared following the scent of skooma and S'oggy killed all of the Khajiit sensing they would get in the way of his revenge against Crotch.

Cock Nibbler, noticing a crazy Khajiit killing the other Khajiit, rounded up all of the remaining Khajiit in Skyrim and placed them in the basement of Cock Tower. Cock spayed and neutered the Khajiit in his cat pit as he believed that's what a "good cat owner" does.

In the events of "Skooma Parley," S'oggy Balls and his unborn child (inside Aela the Huntress) was killed by Crotch Guzzler and the others; rendering the Khajiits "functionally extinct." 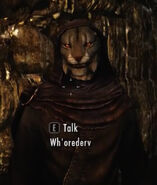 The Cat Pit in Cock Tower 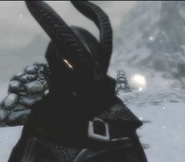 S'oggy Balls, the last breeding Khajiit, is killed in Skooma Parley, rendering the Khajiit "functionally extinct."
Add a photo to this gallery

Retrieved from "https://skyrim-for-pimps.fandom.com/wiki/Khajiit?oldid=9529"
Community content is available under CC-BY-SA unless otherwise noted.