The Ancient Traveler has appeared twice in the series, both times involving Cock Nibbler.

The first time the Ancient Traveler appeared in front of Cock was in Main Quest Completed (S6E31) when Cock entered Sovengard to defeat Goat Nibbler, a.k.a. Alduin. He was waiting for Cock at Shor's Hall to warn him about a greater threat to the world than Goat Nibbler could ever cause, the fight between Fün Tits and Crotch Guzzler. He detailed when and where this would happen which was the third turdas of the third month in Library Land and told him that there would be great evil upon the land if he didn't stop this fight.

Cock was not sure what to make of this warning and was quite skeptical to be told that there is a greater evil than what the gods have sent out to kill. By the same token, the Ancient Traveler was unsure if Cock understood the severity of the issue.

After they defeated the dragon, the Ancient Traveler makes sure Cock would stop Fün and Crotch's fight and part ways.

Fear and Loathing in Skyrim (S6E40)Edit

The Ancient Traveler makes a return in Fear and Loathing in Skyrim (S6E40). It is the third turdas of the third month (the day the fight is supposed to take place) and Cock is drugged up and is on a sexual escapade in Solstheim, having sex with Frea. Fearing that Cock may have forgotten what he said back in Sovngarde, the Ancient Traveler barges in on Cock and Frea.

The Ancient Traveler tries to get Cock to do one more heroic deed but Cock has all but given up on that life. Cock finally bends when the Ancient Traveler tells Cock that Game Society Pimps gods are real and they are waiting on Cock to become a hero and stop this fight. In the following episode, Cock goes over to Library Land on a dragon's back and successfully stops a fight between Fün Tits and Crotch Guzzler.

In Pancake Apocalypse (S4E07), Crotch went to the Wayward Pass in order to obtain a special skull named the "Ancient Traveler's Skull." This was special to Crotch because he was a avid collector of skulls and this one was labelled unlike all the other generic ones. It was on a skeleton when he found it but he placed it on top of his dining table to set the mood for his exotic pancakes. 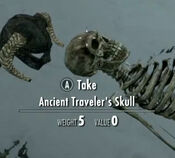 Add a photo to this gallery

Retrieved from "https://skyrim-for-pimps.fandom.com/wiki/Ancient_Traveler?oldid=9410"
Community content is available under CC-BY-SA unless otherwise noted.